With Mies van der Rohe's appointment as the new Bauhaus director, the principle of mere purpose, pure functionality, which his predecessor Hannes Meyer had advocated, was softened. Instead, Mies van der Rohe advocated the implementation of a new beauty in architecture that went beyond the dictates of pure purpose. He now oriented the school more towards the aesthetic-sensual principle.

But it was also a time of political upheaval and a difficult time began in Germany, and not only for architecture. By moving the Bauhaus school from Dessau to Berlin, he was able to prevent its closure for a short time until 1933, but the proximity of the Bauhaus to some socialist ideas as well as the entire cultural concept were a thorn in the side of the Nazis. And so the new rulers closed the Bauhaus and imposed a ban on Mies van der Rohe's profession, despite actions - such as joining the Reich Chamber of Culture or signing an appeal by cultural workers to support the new Reich Chancellor in 1934, which later brought Mies van der Rohe the accusation of opportunism.

Mies van der Rohe is - along with Gropius and Le Corbusier - one of the founders of modern architecture. Initially inspired by the Renaissance style of Karl Friedrich Schinkel, he turned to Expressionism after the First World War. Innovative glass skyscrapers in the Rational Style, also known as "skin-and-bone architecture", were created, which gave new impetus to both contemporary and later architecture. In addition, he also worked as an "occasional furniture designer" and designed, for example, his legendary cantilever chair in 1927.

In 1928/1929 he created the German Pavilion for the Barcelona World Exposition, thus establishing his concept of "flowing space" on an international level. It was based on the idea of an open floor plan in which the walls were released from their load-bearing function. A famous building from this period is the "Tugendhat Villa" in Brno.

During his time in the USA, he created internationally renowned works such as Lafayette Park (1955-1963) or the Battery Park Apartments (1957-1958) in New York. In 1968 he also became active in Germany again, designing the New National Gallery in Berlin. 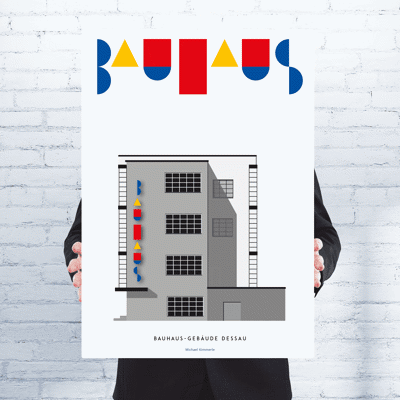 Michael Kimmerle gives an introduction to the world of the Bauhaus.
From 29,00 €