With his photographic work and his typography developments, Herbert Bayer is one of the important protagonists of the so-called New Vision. The principle for his work was "efficiency". At the Bauhaus he designed many advertising graphics.

Herbert Bayer received his first training in 1919 at the studio of the architect Georg Schmidthammer in Linz. In 1920, he became an assistant to the architect Josef Emanuel Margold, who was a member of the artists’ colony in Darmstadt. Bayer continued his education between 1921 and 1925 at the Bauhaus in Weimar and Dessau. In 1921–1922, he enrolled in the preliminary course with Johannes Itten. From 1922 to 1924–1925, he attended the wall painting department under Wassily Kandinsky. On March 2, 1925, he passed the journeyman’s examination of the painters’ guild in Weimar. After the Bauhaus moved to Dessau, Walter Gropius appointed him as a junior master there in 1925. From 1925 to 1928, he was the director of the newly founded printing and advertising workshop at the Bauhaus Dessau.

In 1938, Bayer emigrated to the United States and lived in New York. In the same year, he designed the exhibition Bauhaus 1919–1928 in New York. 30 years later, the exhibition 50 Jahre Bauhaus (50 years of Bauhaus) in Stuttgart was also set up according to his design. In the USA, he was mainly active as a painter, advertising graphic designer and exhibition designer and worked for many companies and institutions. In 1942, Bayer designed the American propaganda exhibition Road to Victory at the Museum of Modern Art in New York. In 1945, Irene Bayer divorced him. Starting in 1946, Bayer worked as a design consultant at the Aspen Cultural Centre. He then became the director of the design department at the Container Corporation of America in 1956. Between 1958 and 1961, he was a member of the arts council of the information office of the USA. He also began to work as a creative consultant for a number of important advertising agencies and department stores in 1965.

Iconic Stairs in the Bauhaus building in Dessau Germany by Walter Gropius
From 29,00 € incl tax

This was the motto of Ludwig Mies van der Rohe, an advocate of minimalism in architecture.
From 29,00 € incl tax

The Bauhaus Table Lamp embodies the essential idea that form follows function, as espoused by the influential Bauhaus school.
From 29,00 € incl tax 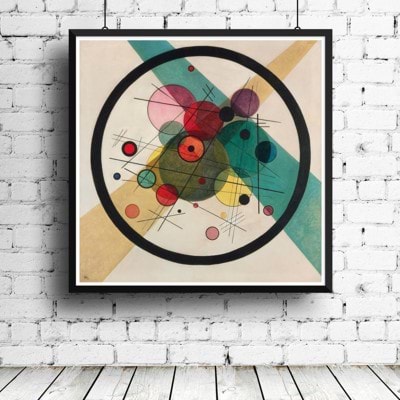 Wassily Kandinsky Circles in a Circle 1923